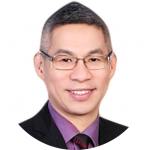 Dr Johann Tang is an oncologist practising at Mount Elizabeth Novena Hospital, Singapore. He has more than a decade of clinical experience in radiation oncology, and has taken care of patients in Singapore and from countries including Indonesia, Vietnam, Myanmar, China, Bangladesh, Sri Lanka, India and Russia.

Prior to entering private practice, Dr Tang was at the National University Hospital (NUH) for 18 years. There, his subspecialties and main research interests included breast, gynaecological, brain and paediatric tumours. He also headed the breast, gynae-oncology, paediatric and brachytherapy radiotherapy services. At NUH, he was the research director of the radiation department, and developed the use of breast brachytherapy (a form of accelerated partial breast irradiation – APBI – to treat early stage breast cancer), outpatient interstitial imaged guided cervical brachytherapy, and paediatric radiotherapy services.

He is passionately involved in education and is currently the co-chair of the Euro-Asia Breast Brachytherapy School. He is part of the BrachyAcademy faculty, as well as the teaching faculty of the Australian Paediatric Radiation Oncology Special Interest Group. He is an external examiner in radiation oncology to the Bangladesh College of Physicians and Surgeons. Dr Tang is an assistant professor at the Yong Loo Lin School of Medicine, NUS, and an honorary fellow of the Bangladesh College of Physicians and Surgeons.

He has mentored residents, authored publications, and refereed for several international journals. He is also the recipient of several research prizes and research grants. Dr Tang currently serves on international committees, and is the only Singaporean member on the Faculty of Radiation Oncology Council, Royal Australian and New Zealand College of Radiology (RANZCR), the Paediatric Steering Advisory Committee to RANZCR, as well as associate editor of Journal of Medical Imaging and Radiation Oncology (JMIRO). He was former vice president of the Chapter of Radiation Oncologist, Academy of Medicine, Singapore and executive member of the Singapore Society of Oncology.