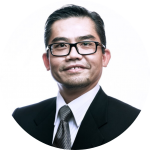 Dr Melvin Look is a Consultant General Surgeon and Medical Director of the PanAsia Surgical Group in Mount Elizabeth Orchard Hospital, Mount Elizabeth Novena Hospital and Parkway East Hospital. He graduated with MBBS from the National University of Singapore and completed his Fellowship in Surgery with the Royal College of Surgeons Edinburgh and the Royal College of Surgeons Glasgow.

He underwent further training for a year at the National Cancer Center Hospital in Tokyo on a Ministry of Health Fellowship in Upper Gastrointestinal Cancer Surgery. He also worked for a year in the Royal Infirmary of Edinburgh, UK, as an Honorary Consultant in Upper Gastrointestinal Surgery. Other training awards include a TTSH Scholarship in Advanced Laparoscopic Surgery at the Mt Sinai Medical Centre, New York, and an International Cancer Fellowship from the Union Internationale Contre le Cancer (UICC) for the Treatment of Peritoneal Cancer at the Washington Cancer Institute, Washington DC.

Dr Look is a general surgeon with a subspecialty expertise in gastrointestinal surgery, therapeutic endoscopy (including ERCP) and advanced laparoscopic surgery. He has a strong interest in Radical Resection, including Peritonectomy Procedures, for the surgical treatment of esophageal, gastric, pancreatic and abdominal cancers. He also performs a wide repertoire of minimally invasive surgery and was the first surgeon in the South East Asia to perform a number of advanced laparoscopic operations; including Hand-assisted Laparoscopic Surgery, Endoscopic Thyroid Surgery, and Laparoscopic Swedish Adjustable Gastric Banding for morbid obesity.

Dr Look is very much involved in surgical education and was a Clinical Lecturer with the National University of Singapore. He is currently a Clinical Teacher with the Duke-NUS Graduate Medical School. He has been invited to surgical demonstrations in international conferences and proctored the training of many laparoscopic surgeons in Singapore and the region. In 2002, he set up the first laparoscopic surgery training center outside of USA to be endorsed by the Society of American Gastrointestinal Endoscopic Surgeons (SAGES).

For his work in the medical field, he has been listed in the peerage publication ???Who???s Who in the World??? since the year 2000. Dr Look has helped train numerous local and regional surgeons in advanced laparoscopic surgery. He set up a training facility outside of America to gain endorsement with the Society of American Gastrointestinal and Endoscopic Surgeons (SAGES).