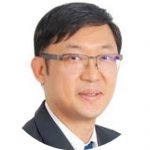 He graduated from the National University of Singapore in 1998 and obtained his post-graduate qualifications in O&G from the Royal College of O&G, London in 2003. He started his gynaecological oncology fellowship training in the Department of Gynaecological Oncology, KKH in 2006 and was awarded the Health Manpower Development Programme of MOH(HMDP) award to train in minimally invasive gynaecological cancer surgery in France under the tutelage of the renowned Prof Denis Querleu in 2008. He has also obtained the Masters in Law (LLM) in Medical Law and Ethics at the University of Edinburgh in 2016.

He was the Head and Senior Consultant Gynaecologist of the Department of Gynaecological Oncology, KKH from 2014 to 2019 as well as the Deputy Chairman of the Division of O&G, KKH from October 2015 to 2019. He was instrumental in developing minimally invasive gynae-cancer surgery to be a standard of care in KKH as well as starting the ICG-NIR sentinel lymph node biopsy services for endometrial cancers since 2016. He performed the first laparoscopic Wertheim’s radical hysterectomy for cervical cancer in 2009, as well as the first ICG- NIR sentinel lymph node biopsy for early endometrial cancer in Dec 2015. He also introduced digital colposcopy services in the management of preinvasive diseases in the colposcopy suites, KKH in 2016. He also delivered the 1st successful pregnancy for a young cervical cancer survivor who underwent a fertility sparing radical trachelectomy in Singapore in 2015.

He was the Academic Vice-Chair of Research in the Singhealth O&G Academic Clinical Program (ACP) from April 2018 to 2019. As a clinical researcher, he has authored and co-authored more than 40 peer reviewed papers. He was also the principal investigator in several multicentre HPV vaccine clinical trials as well as co-investigator in several multicentre chemotherapy trials in KK hospital. He sits in the editorial board of the World Journal of Clinical Cases and Journal of Cancer Metastasis and Treatment (JCMT) and is an associate editor of the Singapore Journal of O&G. His main research interests are in cancers of the genital tract as well as complex pelvic surgery including advanced laparoscopic and robotic cancer surgery.

He is dedicated to medical education to both undergraduates and O&G residents. He was an Associate Professor (Adj) at the YLL Medical School, National University of Singapore, Duke-NUS Medical School, Singapore and the LKC School of Medicine, Singapore from 2017 to 2019. He was a Physician Faculty member of the Singhealth O&G Residency Program from 2012 to 2019 and was the course director of the colposcopy and management of preinvasive diseases program in the Singhealth O&G ACP from 2016 to 2019. He is also an assessor and co-ordinator for the in Hospital clinical training modules for colposcopy, NUS and is a member of the JCST O&G examination committee since 2016.

He has a strong passion in public education especially in the prevention and treatment of gynaecological cancers and has helped organise numerous public health talks and activities for the last decade. He has been a volunteer doctor in the Singapore Cancer Society for many years and is the current Chairman of the Women’s Gynaecological Cancer Awareness committee in SCS since 2014. He also dedicates his time to professional education by serving in the councils of the O&G Society of Singapore (OGSS) and Society for Colposcopy and Cervical Pathology of Singapore (SCCPS) for the last 10 years. He is the current Honorary President of both societies since March 2019. He also served as the section head for gynaecologic oncology in the College of O&G Singapore from 2016 to 2018.

He has won numerous awards including the best clinical teacher award (NUS) in 2007, Service with a Heart awards, Singheath service quality (Star) award in 2011 & 2018, NUS commendation award (role model) in 2013 & 2014, Outstanding faculty award in Singhealth O&G residency program 2014, 2015,2016 and 2018 as well as the best scientific abstract award (Gynaecologic Oncology) at the 10th RCOG international Scientific Congress in 2012 and the Best Video presentation award at the 10th Singapore O&G Congress 2015.